A play by a writer from Newport has been selected to launch the new season by Newport Playgoers at the 400-seat Dolman Theatre.

Phil Mansell’s play ‘According To Claudia’ was chosen by the society’s artistic committee to open a line-up which includes plays by Noel Coward, Somerset Maugham, Ira Levin, Richard Curtis and Ben Elton.

“I feel honoured and proud that my play has been selected to be among work by such illustrious writers,” said 63-year-old Phil, whose wife Caroline will be directing the production.

“The play is a comedy drama about the secrets that emerge when a family gathers to celebrate the 80th birthday of a crusty Oxford don.

His daughters fuel the fire by bringing along partners who include a crime writer and a former East End gangster returning in disguise from the Costa del Crime.” 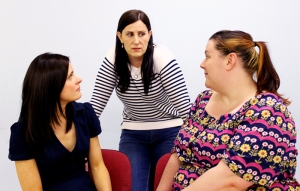 A mystery gunman interrupts the planning of the birthday party. (PHOTO: PHIL MANSELL)

This is the latest success that Phil has enjoyed as a writer. His play ‘Poor Yorick’ was a winning entry in a competition run as part of the Royal Shakespeare Company’s Open Stages project and was performed at both the Dolman Theatre and at Blackwood Little Theatre.

Phil’s play ‘Bunkered’  was one of the winning entries in a competition judged by Welsh playwright Frank Vickery, and enjoyed a very successful run at the Dolman Theatre.

This entry was posted on Tuesday, July 15th, 2014 at 3:36 pm and is filed under Uncategorized. You can follow any responses to this entry through the RSS 2.0 feed. You can leave a response, or trackback from your own site.