Newport Playgoers have started their 93rd season of plays with a bang – their production of ‘Up Pompeii’ has had the audiences rolling in the aisles this week.

This Roman romp whisks audiences back to ancient Pompeii where saucy shenanigans are played out against the backdrop of an ominously rumbling volcano.

This lively production, directed by Playgoers’ favourite Richard Dymond,  is based on the hugely popular comedy TV series starring Frankie Howerd. Few who saw it can forget the wonderful characters whose names speak for themselves: Ludicrus, Ammonia, Nauseus, Erotica, Voluptua and Suspenda.

There’s still a chance to catch it at the Dolman Theatre – the final two performances are on Friday at 7.15pm and Saturday at 2.30pm.

Other forthcoming attractions include ‘The Ladykillers’ based on the classic Ealing comedy and ‘The Graduate’ featuring the seductive Mrs Robinson.

All Set for Roman Scandals

Newport Playgoers plan to whisk audiences back to ancient Pompeii where saucy shenanigans are played out against the backdrop of an ominously rumbling volcano.

Up Pompeii, which launches Playgoers’ 93rd season, was a hugely popular comedy TV series starring Frankie Howerd, and few who saw it can forget the wonderful characters whose names speak for themselves: Ludicrus, Ammonia, Nauseus, Erotica, Voluptua, Senna and Suspenda.

Orchestrating both plot and characters is the head slave Lurcio, who becomes embroiled in the sexual liaisons of his master’s household, as all its members cheat, double cross and generally misbehave.

Lurcio conveys his thoughts to the audience through a series of innuendos and double entendres while trying to help his master’s daughter Erotica, rescue escaped slave girl, Voluptua, listen to Nauseus’s love poetry and enlist the help of local nymphomaniac Suspenda. 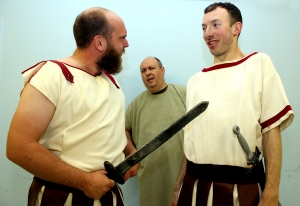 The play was originally written for Frankie Howerd to repeat his success in A Funny Thing Happened on the Way to the Forum, in which he played a similar role. If you like your history treated in a light-hearted and somewhat risqué manner, this is the play for you.

Newport Playgoers are set to end their 92nd season of plays with an award-winning musical extravaganza that started life as a series of greetings cards. 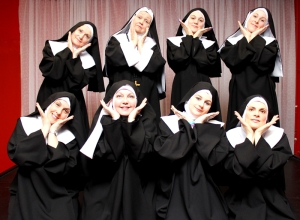 The Little Sisters of Hoboken prepare to entertain audiences with a show to raise funds to bury their fellow nuns who were poisoned by the convent cook. (PHOTO: PHIL MANSELL)

The comic nuns proved so popular that their creator, Dan Goggin, turned them into a cabaret and then expanded that into a full length theatre production.

‘Nunsense’ ran for over 3,500 performances and won the Best Off Broadway Musical award.

The musical romp tells of the Little Sisters of Hoboken and their crazy antics after the convent cook serves up some dodgy soup resulting in 52 nuns dying of botulism. 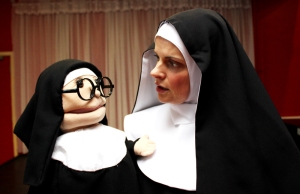 Luckily a few of the nuns were busy playing bingo and were spared this terrible fate. But to their horror they realise the convent hasn’t the funds to pay for the funerals.

The Mother Superior decides she and her fellow nuns will use the left-over set for a production of ‘Grease’ to stage a variety show packed with hilarious show-stopping song and dance numbers to raise the money for the funerals. There follows a hail of fun and frolics as they try to achieve their aim.

The season has been another success for Playgoers who own and run the city’s 400-seat Dolman Theatre.

Beginning with ‘According to Claudia’, a play by local writer Phil Mansell, it included the thriller ‘Deathtrap’ and three plays commemorating the First World War including last month’s funny yet thought-provoking ‘Blackadder Goes Forth’.

One of the highlights of the season was the thriller ‘Deathtrap’ (PHOTO:PHIL MANSELL)

Playgoers are already looking forward to next season which begins in September with ‘Up Pompeii’ the stage version of the show that Frankie Howerd made such a hit on TV.

‘Blackadder Goes Forth’ was one of three plays commemorating the outbreak of World War One. (PHOTO: PHIL MANSELL)

Other forthcoming attractions include ‘The Ladykillers’ based on the classic Ealing comedy and ‘The Graduate’.

Long before James Bond there was only one secret agent who grabbed the public’s imagination – Dick Barton.

The nation was enthralled by his adventures on the “wireless” as he battled against a legion of dastardly villains.

Now, these tales of derring-do are being recreated on the stage of the Dolman Theatre when Newport Playgoers present ‘Dick Barton – Special Agent’.

Written as a parody of the 1940s radio series complete with cliff-hanger endings and song and dance routines, this show has something to appeal to those who remember the original series and younger members who have yet to experience the thrill of the Devil’s Gallop!

Audiences will enjoy the laughs as thrills as Dick, along with his trusty sidekicks Jock and Snowy, sets out to thwart the forces of evil whose plot to poison Britain’s tea supply threatens the very future of the nation.

Dick and his chums find themselves tangled in an adventure soaked with intrigue and mystery, as they face arch enemies Marta Heartburn and Baron Scarheart – all the while finding the time to sing a few songs along the way – and save the day!

A tense moment for Dick Barton (Kevin Myers) when Scarheart (Steve Saunders) pulls a gun on him. (PHOTO: PHIL MANSELL) 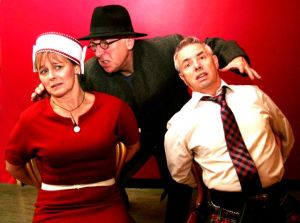 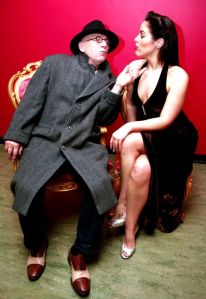 Actor’s Hair-raising Role Raises £500 for Charity as He Goes Bald for Vicar of Dibley!

A leading light of local amateur theatre has raised £500 for charity by having his head shaved for his role in ‘The Vicar of Dibley’. 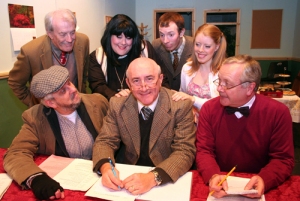 Jerry Grummit, who plays snobby David Horton in the stage version of the hit sitcom, had to lose his hair as there are many jokes about his character being bald.

So, he thought he’d use the hair-raising experience to raise money for the Mcmillan Nurses charity.

Jerry Grummit, in his role as haughty David Horton, prior to having his head shaved for charity. (PHOTO: PHIL MANSELL)

“I thought it was a very worthwhile cause as it provides invaluable support for cancer sufferers and their families,” said 57-year-old Jerry who lives in Blackwood. “So far, through sponsorship I’ve raised £500 and hope to make it even more.”

Jerry, who is an Openreach Works Controller with BT, has been involved in amateur theatre for over 35 years and has played a variety of roles, but admits that being in ‘The Vicar of Dibley’ has been most fun.

“This is my first part with Newport Playgoers and everyone has been so very warm and welcoming I’ve felt really at home.

“My character is a very stuffy person and much of the comedy revolves around his strait-laced attitude to everything – particularly the arrival of a new vicar who is a woman.”

The play gives audiences a chance to revisit the quiet village of Dibley and meet its many insane inhabitants as the new female vicar, Geraldine Granger, takes up her post.  As with the TV show much of the fun is provided by the eccentric members of. Dibley Parish Council, from dithering Jim Trott to eccentric cook Letitia Cropley. 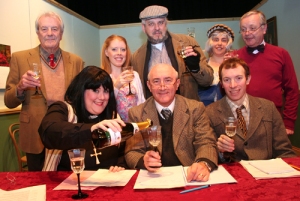 Jerry (centre) is toasted by the cast of ‘The Vicar of Dibley’ for his charity fund-raising efforts. (PHOTO: PHIL MANSELL)

Schoolchildren from Newport are all set to tread the boards with TV’s ‘Vicar of Dibley’ as the stage version of the show comes to the Dolman Theatre.

Twenty five youngsters from the children’s Dolman Theatre Works auditioned and eight were chosen to be in a scene set in a Sunday school run by the loveable but dim verger Alice Tinker, played by Rachel Fenwick.

“They are a lovely bunch of kids who are really excited about being in the play,” said director Rosie Bissex.

“In fact, they are so enthusiastic they are also helping with props and anywhere else they can lend a hand. I’m sure they’ll steal every scene they’re in!” 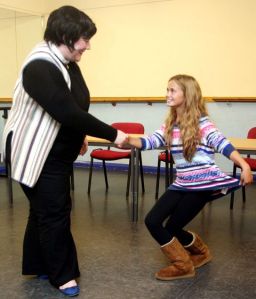 “I have to do a curtsey when I meet the new vicar. We all love the TV series and are really enjoying being in the stage show.”

“The children have been a joy to work with and are showing a real talent for acting,” said Karen Davies who plays the part made famous by Dawn French.

The play will give audiences a chance to revisit the quiet village of Dibley and meet its many insane inhabitants as the new female vicar, Geraldine Granger, takes up her post.

There’s a treat in store for all fans of the sitcom ‘Dad’s Army’ – the show and its cast of wonderful characters will be brought to life on the stage of the Dolman Theatre next week. 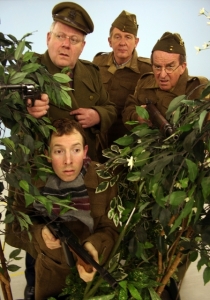 All the favourites will be on parade as Newport Playgoers present three fun-packed episodes of the classic TV programme, including ‘The Deadly Detachment’ in which the bumbling Home Guard capture a German U-boat crew.

Written by Jimmy Perry and David Croft, the show tells of the exploits of the Walmington-on-Sea Home Guard as they defend their quaint town against the might of the Nazi invasion force. 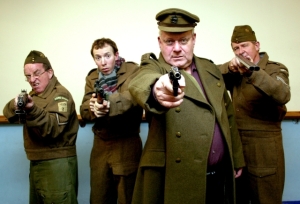 The show follows on from Newport Playgoers’ success with the stage version of another hit TV series, ‘Fawlty Towers’, last year.

Newport Playgoers
Create a free website or blog at WordPress.com.