Look Out for ‘The Ladykillers’ at the Dolman

A sweet little old lady is pitted against a gang of criminal misfits who will stop at nothing – including murder! That’s the plot of Newport Playgoers’ next production, ‘The Ladykillers’.

This classic black comedy, based on the much-loved 1955 film of the same name, tells how Professor Marcus and his gang, posing as amateur musicians, rent rooms in the lopsided house of sweet but strict Mrs Wilberforce. 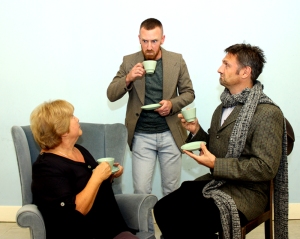 Misfit crooks Harry (Luke Bowkett) and Professor Marcus (Gareth Baskerville) are plotting do away with Mrs Wilberforce (Ruth Ferguson) even as they take tea with her. (PHOTO: PHIL MANSELL)

The villains plot to involve her, unwittingly, in Marcus’s brilliantly conceived heist job. The police are left stumped but Mrs Wilberforce becomes wise to their ruse and Marcus concludes that there is only one way to keep the old lady quiet. With only her parrot, General Gordon, to help her, Mrs Wilberforce is alone with five desperate men. But who will be forced to face the music?

The play is based on one of the most famous Ealing Comedies which included Peter Sellers, Herbert Lom and Alec Guinness in the cast. The stage version has been entirely reworked, by comedy writer Graham Linehan who scripted classic TV shows Father Ted and The IT Crowd.