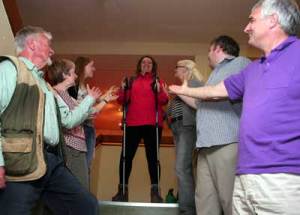 Fund-raiser Rhian with members of the cast of ‘Humble Boy’ (PHOTO: PHIL MANSELL

A leading light with Newport Playgoers has raised £13,000 for Velindre Hospital – by swapping her greasepaint for walking boots and climbing up Mount Kilimanjaro.

Rhian Mitchell raised the last £1,000 with a collection at Playgoers’ recent production of ‘FawltyTowers’, and members of the cast of their latest  presentation, ‘Humble Boy’, took time out from rehearsals to congratulate her. 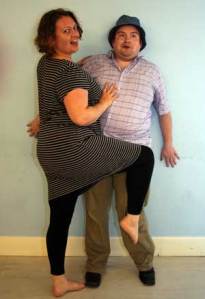 “So many people know someone –  family friends or colleagues – who have been affected by cancer and have benefited from Velindre Hospital, so it seemed like a really good charity to support,” said Rhian, who lives in Usk. “I plan to do it again in a couple of years time, and raise even more money for this very worthy cause.”

The cast of ‘Humble Boy’, a modern take on ‘Hamlet’ set in a English country garden took a moment from rehearsals to congratulate Rhian on her achievement. Rhian can be seen playing the part of Rosie in the play at the Dolman Theatre from 11 – 15 October. Tickets can be booked by phoning the box office on 01633 263670 or visiting www.dolmantheatre.co.uk.