Signing Introduced by Playgoers for Hard of Hearing

Newport Playgoers have introduced signing for theatregoers who are deaf or hard of hearing for their latest production, ‘Deathtrap’. 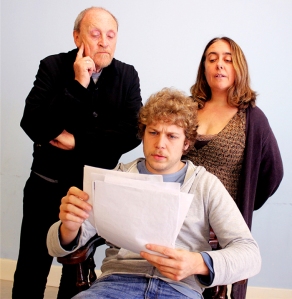 The final performance of the play this Saturday night (17th January) will have a signing expert at the side of the stage to make the performance more accessible and enjoyable for people who are deaf or hard of hearing. If it proves to be a success then signing could be used in all future productions.

‘Deathtrap’, which is at the Dolman Theatre from 14 – 17 January is one of the longest running Broadway thrillers in history. It’s an ingenious play with a twisting plot that offers a rare and skilful blend of suspense and humour guaranteed to make audiences scream with both laughter and terror.

For more information and to book tickets phone 01633 263670 or visit www.dolmantheatre.co.uk.

The cast of ‘Deathtrap’ have fun during rehearsals. (PHOTO: PHIL MANSELL)